Please welcome Alex Bledsoe to The Qwillery. Alex is the co-author with Tara Cardinal of Sword Sisters. He is also the author of the Eddie LaCrosse novels, the Tufa novels and more. 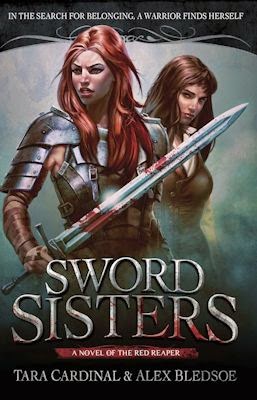 
“She is a woman - much woman. Should her perfidy be less than that of other women?”
—John Wayne as Genghis Khan in The Conqueror, written by Oscar Millard


In case you weren’t aware of it, John Wayne—yes, that John Wayne—really did play Genghis Khan in the 1956 movie, The Conqueror. It was a disaster. Beyond the questionable casting, though, what really sank the film was the dialogue, written in the faux epic style quoted above. I mean, come on: no one ever said (to quote another line from the film), “You’re beautiful in your wrath.” People never spoke that way, not a thousand years ago or at any other time. And yet, we somehow expect that sort of thing from both historical tales, and secondary-world fantasy.

One reason is that the historical writing we have from bygone eras doesn’t sound anything like the way we speak now. I mean, people still have trouble deciphering Shakespeare, and he wrote in English. So we assume that, in the generic “olden times,” people spoke in this arch, highly-stylized way.

But that wasn’t the case. Written and spoken languages were very different up until the last hundred years or so. There was no attempt to capture the rhythms and verbiage of day-to-day speech in writing, because that was considered vulgar. The written word was expected to be grammatically, and socially, correct.

Which brings us to Sword Sisters, and the decision about the type of dialogue my co-author, Tara Cardinal, and I would use in it.

I’d already given this issue a lot of thought as I wrote my own Eddle LaCrosse novels (He Drank, and Saw the Spider is the most recent). Like Sword Sisters, they are secondary-world fantasies, but they’re written in a style that deliberately echoes the great noir writers like Chandler, Hammett, and Parker. So the dialogue is completely contemporary, and the characters have contemporary names like “Eddie.”

There’s a reason for this beyond mimicking a style, and it’s one that I hope keeps the stories sincere as opposed to parodies. If you want your reader to experience the same emotions as your characters, you first have to remove the obstacles separating the two. One of them is the way they speak. If your dialogue features syntax like that quote from The Conqueror, then you may succeed in reminding your reader that this story takes place somewhere other than the modern world, but you’ll have a harder time making them care.

Consider that Conqueror quote in detail. What is Genghis Khan actually trying to convey? Well, in the less-than-egalitarian fifties in which the movie was produced, he’s saying, “She’s a woman, so of course she’s sneaky.” So why can he not simply say that?

The answer is, he can. And in the fantasy I write, and like to read, he would.

When I joined Tara Cardinal to write Sword Sisters, we already had Tara’s original screenplay for the film Legend of the Red Reaper as a template for tone, style and pace. There’s very little of the arch Conqueror-style dialogue in it, and I took it as license to use a more conversational style in the novel. It’s not the same style I use in my own writing, because I’m not the only writer involved in this one. But it does allow the dialogue to flow in a realistic, contemporary way, so that the characters feel like people you might know, rather than ones you’d only read about in dusty old books.

The way people talk in stories and novels is one of the most important ways a reader gets to know them. Tara and I wanted to make it easy for readers to step into our world, so we used a style of dialogue that was open and contemporary. We hope you agree that it’s the right choice. 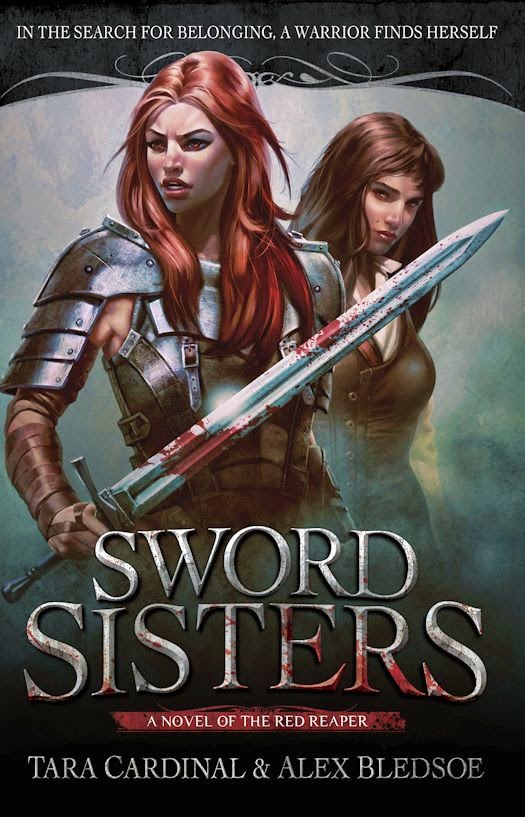 Cast aside by her mother, tormented (literally) by her father, feared by humans and despised by most of her own kind, AELLA is determined not to care—not to care what they think, not to care if they like her, not to care about anything or anyone. Just so long as no one tries to touch her or imprison her again, Aella couldn't care less.

Until...he pulled an arrow from Aella's back and kissed her cheek.

Until...she carried Aella home and stood between her and a giant spider. And a rioting mob.

Aella, daughter of demon and witch, must find herself once again, as she forges her own route to a destiny she doesn't want to believe. At first a hero in name alone, Aella soon discovers she has the strength and the heart to control her demonic lineage and truly assume the mantle of HERO. In her struggle, she also finds something even more valuable—friendship, as the youthful and spirited AMELIA isn't just a friend worth dying for—she's Aella's true "sword sister" and worth living for.

Based on actor/director Tara Cardinal's LEGEND OF THE RED REAPER motion picture, SWORD SISTERS is the prequel to the film, now available on DVD and download. 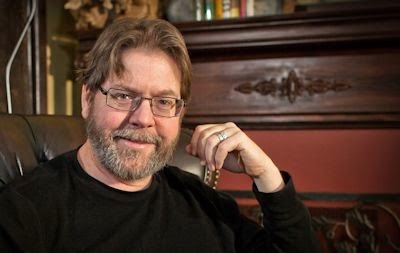 Alex grew up in west Tennessee an hour north of Graceland (home of Elvis) and twenty minutes from Nutbush (birthplace of Tina Turner). He has been a reporter, editor, photographer and door-to-door vacuum cleaner salesman.

He is known for his Eddie LaCrosse novels (The Sword-Edged Blonde, Burn Me Deadly, Dark Jenny, Wake of the Bloody Angel and He Drank, and Saw the Spider), the novels of the Memphis vampires (Blood Groove and The Girls with Games of Blood) and the Tufa novels (The Hum and the Shiver, Wisp of a Thing and the forthcoming Long Black Curl) and his own “Tales of the Firefly Witch” series. He now lives in a Wisconsin town famous for trolls, writes before six in the morning, and tries to teach his three kids to act like they’ve been to town before.